The Massachusetts Association of REALTORS released the October 2012 sales report. Single-family median prices had the biggest monthly year-over-year jump since the final month to take advantage of the home buyer tax credit in June 2010. In addition, sales were up for the 16th  straight month compared to the same time last year. Condo median prices and sales both went up compared to October 2011.

This wonderful property is perfect if you are thinking of having a few animals or love to garden. It comes with a well maintained Ranch, 2 Barns, and Garage. The 4 acres is mostly open and has river frontage. Easy to show and ready for you to move in and enjoy! For more information and photos click here to check out the visual tour. 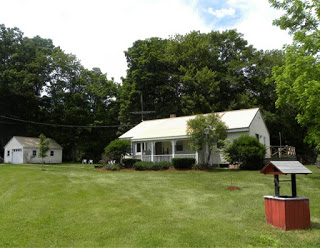 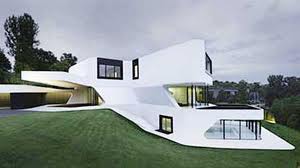 I came across an interesting article about what homes will be like in 2100.    For those of us that can remember, it seems like yesterday we were using a rotary phone.   Here we are 30+ years later and now have smart phones, IPADs  and the list goes on.
Ever wonder what is next?  Here are some predictions that I found worth posting.
The walls of one's home will be intelligent, and capable of simulating a shopping experience in three dimensions.
Most homes will be modular and customs will be built with pre-manufactured parts.
Each home will have its own water reclamation/recycling plant.
Clients will take life-like virtual walk-through of their homes before they are constructed or purchased.
Energy will be generated by sunlight hitting a home's windows.
Wires will not exist.
Toilets will have DNA scanners that can detect proteins and fragments of cancer cells before tumors develop.
Every home will be net-zero.
I believe most on the list will come true.  It seems like everything is moving too fast.  Maybe it is time we go backwards.  Life was simpler and something to be said about the "good ole days".
What are your thoughts?
Share 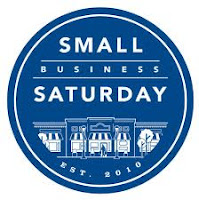 Tomorrow is an important day for the small businesses that count on your support during the holiday season. What I enjoy about shopping local is the unique gifts that you can purchase for that special person in your life.  There is nothing like receiving a gift that is handcrafted by a local person or a gift certificate to your favorite local store.  Think about all the wonderful places we have to pick from when selecting that special gift.  We are fortunate to live in a community that is alive with tradition.  Forget the mall - shop small! 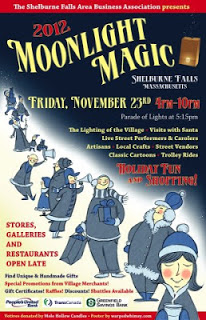 Looking forward to this years Moonlight Magic in the Village of Shelburne Falls.    It is a wonderful evening that is guaranteed to get you in the spirit of the holiday season.    The whole family will love it!  Great food - listen to carolers - watch street performers - check out all the shops that are open late.

The festivities start Friday November 23rd at 4:00 p.m.  You will want to get there early to park.  The lighting of the village starts promptly.

Get your holiday shopping done early and don't forget this weekend is small business Saturday!  You can start supporting local businesses on Friday evening right here in the charming Village of Shelburne Falls!

National Association of REALTORS Chief Economist Lawrence Yun breaks down the housing market, job growth numbers and the impact of the Presidential election in this candid interview.  An interview worth listening to. 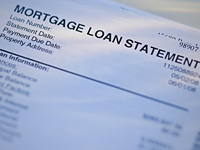 I am often asked if I think the mortgage interest deduction will eventually be eliminated.  It is one way our government is proposing to help reduce the national debt.  It is definitely going to change and those making a certain amount won't be able to take the deduction.   I came across this article that defines how this could affect you.

HOW FISCAL CLIFF COULD AFFECT THE MORTGAGE INTEREST DEDUCTION:

It is arguably one of the most popular U.S. tax deductions, and for some it is the necessary stimulus to buy a home.

The mortgage interest deduction, however, is now at risk, due to negotiations over the so-called "fiscal cliff"--the year-end deadline for large spending cuts and the expiration of tax cuts.
While it is impossible at this point to know what the outcome will be, it is certainly worth running through the possibilities.

First, let's do a primer on the deduction as it stands now:

The deduction lets homeowners reduce their taxable income by the amount of interest paid on their mortgage. This can be on the principal residence or a second home, but not on mulitple investment properties. Taxpayers are eligible for this deduction only if they itemize. Finally, the interest deduction is capped at $1 million of your mortgage.

This deduction, which is the largest housing-related subsidy in the U.S. tax code, reduced income-tax revenue by $79.9 billion in fiscal year 2007, according to the Office of Management and Budget. So what is that in real cash savings to taxpayers? Number crunchers at the Wharton business school did the math:
For those making less than $40,000 a year, the average tax savings is about $100. But in that bracket less than one-quarter of homeowners itemize deductionsl, so most don't get anything.
For those earning up to $250,000, the average savings, based on average mortgage amounts, would be $1,200-$2,600 a year. For those earning more than $250,000, and 100 percent of them itemize, the average savings is $5,400 a year.

Now to the proposals--and they are many.

Other proposals include eliminating the deduction only for taxpayers earning $250,000 or more, ending the benefit for second homes, ending the deduction entirely or limiting the amount of all itemized deductions to $25,000. That last one was advocated by Mitt Romney, but apparently some Democrats on Capitol Hill are starting to espouse it.  Without one proposal leading the pack, again, it is impossible to boil down the real cost to homeowners, but suffice it to say that anyone in the business of home ownership is opposed to reducing the mortgage interest deduction.

"It's chilling the market," said Jerry Howard, CEO of the National Association of Home Builders.  "Whenever there is uncertainty surrounding the value of an American home, why would you expect people to go out and buy a home? Or, just as much to the point, when there's uncertainty about the value of a home why would someone put their house on the market to sell it, that's why this whole debate to me is counter-productive and is only retarding the nation's economic recovery."

"The mortgage interest deduction is vital to the stability of the American housing market and economy, and we will remain vigilant in opposing any future plan that modifies or excludes the deductibility of mortgage interest," said Gary Thomas, president of the National Association of Realtors.

Whatever the arguments for or against the mortgage interest deduction, two things are indisputable.  Going over the fiscal cliff will kill the housing recovery, but said recovery is already so tenuous that yet another barrier to entry will hurt.
--By CNBC's Diana Olick

The Crafts of Colrain is a full weekend of a self guided tour with 18 artists and farms that will display and sell their work.   Enjoy a beautiful drive in the country and get started on your holiday shopping.   Give a gift that is locally made! .  Hours for both days are 10 to 5.   For more information about the tour, artists and a map check out the Crafts of Colrain web site!

CORNUCOPIA AUCTION
Join us for a wonderfully entertaining evening at the 9th annual Cornucopia Auction. The event will be held Saturday, November 3, 2012 from 5 to 9 PM. at the Academy at Charlemont.

Schedule for the Evening:
5:00 - 6:00         Preview
6:00 - 7:30         Silent Auction Bidding
7:30 - 9:00         Live Auction
The Silent Auction bidding will start promptly at 6 and finish at 7:30 when the live auction commences. Former Academy parent Doug Wilkins returns this year as auctioneer. The Academy's Sumner Recital Hall is transformed into a beautiful gallery for a dazzling array of high quality silent and live auction items.  Student servers offer trays of delicious hors d'oeuvres and samples of local award-winning cheeses, local sweet cider, West County hard ciders, Berkshire Brews, and fine wines selected by the Shelburne Falls Wine Merchant.
The Cornucopia Auction provides the Academy and the greater community an opportunity to come together to celebrate all that is special about where we live, in addition to generating financial support for the school. It is a wonderful evening of networking, holiday shopping and eating treats, so please join us to show your support.
Tickets are $20 per person.  For more information and list of auction items - visit the web site!
Share

It is that time of year - Cider Days is happening this weekend.  It is great family fun and with lots to do.  The weather is going to be perfect.  Make your plans with you family and enjoy Cider Days!
For a list of events and more information check out the website!

CiderDays is a community event celebrating all things apples in Franklin County, Massachusetts. 2012 marks the 18th year of this event and there will be two days (November 3rd and 4th) of orchard tours, cidermaking and tastings, workshops and much more. This is for all who love apples, fresh or hard cider, apple cuisine, apple orchards or just being in New England in the fall. There is a charge for some of the activities but there is no admission for many of the activities at local orchards or for the workshops or Marketplace at the Shelburne Buckland Community Center in Shelburne Falls (from 10 AM - 5 PM on Saturday).