Share
The January report is provided by the
Massachusetts Association of REALTORS:

Looking for a getaway that needs absolutely no work, come take a look at this meticulously maintained A-Frame.  This low maintenance year round home has a newer roof, vinyl siding, newer windows and a great back deck.  The interior has a kitchen that is open to the dining and living area; two cozy bedrooms on the 2nd floor and all can be heated with either electric or woodstove.  Part of the Mohawk Beach Estates - swimming, fishing, rec area and more! It is sweet as can be and worth a look!

Take a tour of this perfect getaway!

As one of the Board of Directors for the Greater Shelburne Falls Area Business Association, I had the pleasure of being a part of a wonderful group of people who made the trip to the State House in Boston to receive the Creative Community Award on behalf of the Village of Shelburne Falls.  The Massachusetts Cultural Council Commonwealth Awards celebrates extraordinary achievements of the cultural organizations artists, leaders and philanthropists who make Massachusetts a better place through their creativity and commitment.   Of course we all had to make a statement so people at the State house would know all about us.  Prior to our visit the group got together and decorated our shoes to represent the "Art Walk" that happens four times a year.   I had so much fun at the Art Garden in Shelburne Falls where you can have fun with your "creative" side!  As you can see by my shoes, I got a little carried away and they were certainly noticed!  It was a special day for Shelburne Falls and an honor to be there.
Cathy and I are both natives of the area and are amazed how our village that we have loved for some years has transformed to be recognized as "100 Best Small Art Towns in America."
Written below was taken from the program given at the event about why Shelburne Falls is so special.
Shelburne Falls gets it all right - preserving its historic small town character while being open to the best of modern life. Our thriving cultural community lives and works right in the heart of a rural landscape of wooded hills, family farms, and winding country roads. Visitors can enjoy world-class opera in 1898 Memorial Hall Theater's Met Live series, or discover eclectic art and crafts galleries and working studios throughout the village. Mocha Maya's Coffee House offers live music year-round, and our fine restaurants stimulate visitors' palates with fresh, innovative local foods.
With all the working artists in the area, it's no surprise that Shelburne Arts Cooperative and the Salmon Falls Artisan Showroom together feature nearly 150 artists from across the region. Lamson & Goodnow is one of the oldest manufacturers of fine cutlery in the nation, and still manufactures its high-quality products here. Don't miss L&G's Factory Outlet. Ride the fully restored Trolley No. 10, lone survivor of the streetcars the Shelburne Falls and Colrain Street Railroad ran across the Bridge of Flowers and up Main Street in the early 1900s. Visit Shelburne Falls Bowling, the second oldest candlepin bowling alley in North America, where they've been bowling since 1906. And experience the curious geological formation known as the Glacial Potholes at the base of Salmon Falls, a traditional fishing site for Native Americans.
Share 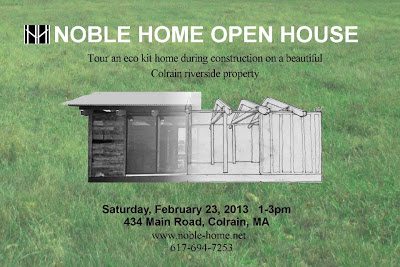 Noble Home is building a showcase house at 434 Main Road in Colrain, MA. We are very excited about this project and it is already proving a valuable experience which will help us get the building system even more user friendly.
The house is situated on 2.9 acres of flatland and wooded slope down to the beach edge of the North river. The home will be 1400 square feet with 3 bedrooms. The super-insulated structure coupled with the polished concrete floor mass and expansive south facing glass will provide natural solar heating. The overhangs will protect the home from the sun's rays in the warmer months and large sliding glass doors can open for summer cooling.
We will have the kit part of the house finished in February, weather permitting. An open house is scheduled at this point for visitors to view the assembled kit as well as supporting photos and video highlighting the simplicity and beauty of the Noble Home building system.

This pie chart clearly shows where we stand as far as the foreclosure market.   National statistics indicate that foreclosure sales will account for 20% of the sales over the next two years.   We are not out of the woods yet, but doing much better than previous years.   This information came from an article posted on Forbes.com titled "Have All The Bad Loans Already Been Foreclosed?"   A great read if you have interest in learning more about the status of foreclosures.

Share
Warm and inviting well maintained Farmhouse that is loaded with charming details and offers all the comforts you want in a home.    You will love the interior that features a real nice kitchen with attractive cabinetry and beautiful woodwork.   In addition there is a large living room with handsome built-ins;  dining room;  2 bedrooms and separate laundry/studio room that could be used as a 3rd bedroom; 1 ½ baths, and hardwood floors.     There is a fabulous separate heated studio with two rooms, ½ bath, large picture window and a deck!  It is perfect for artists, home office or most anything.   This home also features a 1-carr garage,  2 porches, and an oversized yard with flowers and its perfect for vegetable garden.   $215,000
Enjoy the visual tour of this property:
Share

I have some very exciting news to share with you.
It is hard to believe this is my 20th year selling real estate.  My business has grown to new levels and I have the opportunity to partner with someone that is not only a dear friend but is my equal when it comes to business.
I am pleased to announce my new business partner, Cathy Roberts!  You might recognize her name as she is one of the areas most respected and successful loan officers.  Prior to banking, Cathy worked as a real estate agent and is excited to get back into the business.   We both have a passion for real estate and the same dedication to provide exceptional service to both buyers and sellers. Together, Cathy and I bring 37 years of combined experience in real estate sales and mortgage lending.  We will remain affiliated with Coldwell Banker Upton-Massamont REALTORS serving the Franklin and Hampshire County area.
Thank you for your business and continued friendship.
Wanda