If you are interested in buying a home in the Franklin County area, we have several on the market that you should check out.  You can also visit our website at www.mooneyandroberts.com for our complete list of homes, land and commercial properties that are on the market! 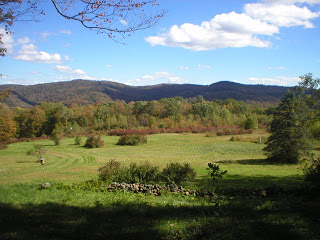 Attention Outdoor Enthusiast!  This property is a rare find! 103 acres located at the end of the road.  Complete privacy, breathtaking views, open land, blueberry bushes, hardwood, southern exposure and the list goes on!  You could be self sufficient and not have a worry in the world.  The solid Ranch style home has beautiful wood floors, open kitchen, dining and living area with a wall glass overlooking the mountains and field below! 30 x 40 metal building and a woodshed!  Must be seen! $270,000

CHECK OUT THE VISUAL TOUR:

Mortgage rates will continue to rise. They will probably be near 5 percent by this time next year, compared to the 3.5 percent average of the past 12 months. The rates will be even higher in 2015 and 2016. Certainly, rising rates are bad news for buyers and some potential homebuyers will be pushed out of the market. For example, the number of renter households that have sufficient income to buy a $177,000 home at a 3.5 percent mortgage rate is 17.8 million. The number drops to 14.9 million at a 5.0 percent mortgage rate, which is a decline in percentage terms of 16 percent.

But there is one major compensating factor that can easily neutralize the negative impact of rising rates. As REALTORS® well know, there are many good potential buyers who have been denied a mortgage that in past normal years would have easily qualified. The comparison is with normal years and not the bubble years of no standards whatsoever. The Federal Reserve has also often commented about the excessively tight underwriting standards in today's mortgage market. At the same time, banks have been reporting a strong profit growth from mortgage originations due to exceptionally low default rates on recently originated mortgages, particularly since 2010. Such well-performing recent mortgages should not be surprising since defaults do not happen in an environment with rising home prices. It appears then more loan originations, at least at the margin, will bring more profits for the lenders and correspondingly bring more buyers out into the marketplace. My estimation says there would be an additional 15 to 20 percent more homebuyers who qualify by returning to normal underwriting standards from the current very tight conditions. The table below shows the average credit score of those who obtained mortgage approvals in recent years. The credit scores are much higher now than in past normal times. So, for example, someone with a credit score of 730 would have had no trouble obtaining a Fannie-backed mortgage in the past, but is currently getting denied today. 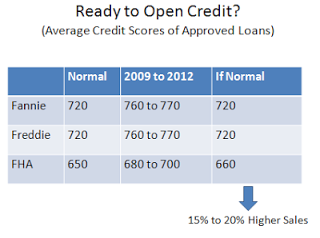 There are other factors that can also help alleviate the rising interest rate conditions. The economy is adding jobs. A total of 2 million net new jobs were added in the past 12 months and another 2 million new ones are likely over the next 12 months. More jobs always lead to more home sales as long as rates do not spike.
Furthermore, there could be room for a reduction in fees associated with obtaining government-backed mortgages. The high profits generated by Fannie and Freddie in recent quarters are implying excessive add-on fees charged to consumers by these two effectively government agencies. A pure for-profit company should have the right to innovate and earn any profit it can obtain as long as there are no barriers to entry into the business. But Fannie and Freddie, as we have learned, are not and should not be for-profit entities. They got into a mess because of the hyper-gambling mindset of "heads we win and tails taxpayers lose". Fannie and Freddie need to stick to the simple business plan of guaranteeing soundly underwritten, mostly boring 30-year mortgages, as they are currently doing. These simple 30-year fixed rate mortgages served our grandparents well and they subsequently will serve our grandkids well. No major innovation is required, which is the reason why being an effectively government agency can work fine. (We should, however, never trust the government to come up with an innovative product. Today's iPhone and similar competitive products are worlds apart from the phones that our grandparents used.) The point is that Fannie and Freddie are making good profits now. They should first speedily repay the taxpayer bailout money. But afterwards, excess profits only mean excessive consumers fees. So a reduction in fees in the near future should occur, just in time to help offset the higher mortgage rate environment.

Lawrence Yun is Chief Economist and Senior Vice President of Research at NAR. He directs research activity for the association and regularly provides commentary on real estate market trends for its 1 million REALTOR® members