Share
Economist George Ratiu and Marketing and Communications Manager T.J. Doyle including a few bright spots in home prices, retail sales, and the producer price index. However, we still have a ways to go as these bright spots are balanced by continuing economic malaise. Topics this week include:
Share 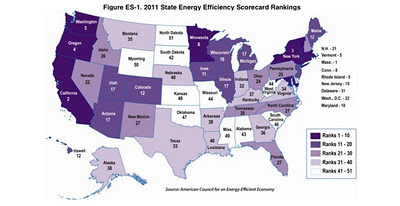 The Most Energy Efficient States In The Nation.

Energy efficiency--it's all the rage these days. From CFL light bulbs to Energy Star fridges, it's easy to try to reduce your personal energy consumption. But those advances stem, in large part, from regulations and subsidies from local, state, and federal governments. At the state level, there's a tremendous differences in how those regs and dollars hare doled out.

A new study from the American Council for an Energy-Efficient Economy ranks all 50 states in terms of how energy-efficient friendly their policies are. These metrics include how much the state is doing to increase efficient transportation, building, and power production, as well as the standards it enforces on appliances and the programs it has in place to help citizens be more efficient.
Unlike electric car adoption, which hews to a strict red state/blue state divide, the efficient states are spread more evenly across the country (Idaho is just as efficient as Pennsylvania). Still, the states one would expect to be efficient are: Massachusetts leads the pack, with California, New York, Oregon, and Vermont all in the top 10.
But this entirely predictable gallery of eco-friendly states may soon have competition, as budget shortfalls make everyone start looking hard at ways to save. Alabama--ranked 49th last year--was one of the most improved states, rising to 43rd place. Michigan, Illinois, Nebraska, Maryland, and Tennessee also made huge strides, by doing things like improving building codes, investing in solar, and offering incentives to buy more efficient vehicles. Hopefully, for everyone's sake, the battle for most efficient state is just starting to heat up.  http://bit.ly/sUpOFj
Share
Performer(s): Chris Pierce, Shane Alexander & Sean Ashby
Type of Event: Live Music
Location: Memorial Hall
51 Bridge Street
Shelburne Falls, MA 01370
Time: Friday, November 4th at 7pm
Admission Fee: $20 per ticket
Event Description: Mocha Maya's presents a benefit concert for the victims of the flooding caused by hurricane Irene! Proceeds will go to the West County Relief Fund where they will then be dispersed to those in need in West County.
The show will feature 3 international touring and recording artists. (Abbreviated info directly below, links to full bio's at bottom of page.)

Chris Pierce has dominated the underground independent music scene in Los Angeles for years and has opened for the likes of B.B. King, Al Green, Macy Gray, Ben Harper and has toured with Seal. Pierce's musical presence is larger than life, echoing the classic R&B sensibilities originated by Otis Redding, Ray Charles, and Bill Withers while his songwriting intelligence invites spectators into a space removed from time or trend, and turns them into participants in the stories he soulfully spins.

Shane Alexander, who we are proud to say played here at Mocha Maya's a year or so ago, returns with his career ever expanding. This last summer he was the opening act for the Styx Yes tour. He has also opened for Seal and Jewel on two tours. "...a cross between Jeff Buckley and John Mayer. Alexander is great!" - Music Connection "Jack Johnson, James Blunt, Jeff Buckley. You can effortlessly add the young American singer/songwriter Shane Alexander to this list of popular singer songwriters." - Willem Baars, Playboy

Sean Ashby's guitar playing has appeared on CD's with sales in excess of 10 million copies worldwide! Chances are, if you've had a radio on today you've heard his guitar playing. As one of North America's go-to guitarists, Sean Ashby has played and recorded with Sarah McLachlan, Delerium, Ginger (former Grapes Of Wrath), and many more. He has appeared on the Grammy Awards twice, The Tonight Show with Jay Leno five times, SNL and David Letterman three times, as well as other major TV shows.

Mocha Maya's decided to launch their, "Mocha Maya's Presents" benefit concert series with a benefit concert to aid people affected by Hurricane Irene. "We have been working on a series to be held in Memorial Hall for some time now and the timing was right to kick it off now with the need being so great after all the flooding west county experienced." states Chris King.
Tickets will go on sale on Saturday, October 15th and can be purchased at Mocha Maya's and online atmochamayas.com To purchase tickets at Mocha Maya's, cash or checks are acceptable. Those wanting to use credit or debit card must purchase tickets online. Tickets purchased at the door (the night of the show) must be paid for with cash.
Full bios:
For Chris Pierce online here
For Shane Alexander here
For Sean Ashby here
Public please contact: Mocha Maya's by phone at 413-625.MAYA (6292) or by email at  This e-mail address is being protected from spambots. You need JavaScript enabled to view it " style="border-bottom-width: 0px; border-color: initial; border-left-width: 0px; border-right-width: 0px; border-style: initial; border-top-width: 0px; color: #1155cc; font-family: inherit; font-size: 11px; font-style: inherit; margin-bottom: 0px; margin-left: 0px; margin-right: 0px; margin-top: 0px; outline-color: initial; outline-style: initial; outline-width: 0px; padding-bottom: 0px; padding-left: 0px; padding-right: 0px; padding-top: 0px; text-decoration: none; vertical-align: baseline;" target="_blank"> info@mochamayas.com
Share

I was on twitter and came across a tweet from channel 22 about the Save the Dream Tour. This event is to help struggling homeowners who are facing foreclosure. It is the first I've heard about it and want to spread the word. I'm not familiar with it but if you need help, this might be the answer for you. It is taking place in Hartford CT starting today the 20th to Oct 24th 8:00 am to 8:00 pm. More information visit http://www.naca.com

Credit Access and Other Problems for Small Businesses:
o In 2009, "The principal immediate economic problem for 51 percent of small employers remains slow or declining sales, six percentage points more citing the problem than one year ago. Uncertainty was identified by over one-fifth (22%) as theirs, followed by access to credit (8%) and falling real estate values (8%), virtually the same as last year. Even among owners who report they cannot get credit, twice as many cite poor sales as cite credit access." (NFIB 2010, page 1)
o 2010: "Poor sales (29%) and uncertainty (26%) continue to be greater problems for significantly more small business owners than access to credit (12%). Still, a majority of owners able to judge think credit is more difficult to obtain today than one year ago." (NFIB 2011, page 1)
o On net, a greater share of banks have reported easing terms on commercial and industrial loans to small firms since the second half of 2010 while tightening prevailed from the first quarter of 2007 through the first quarter of 2010. A similar trend is seen for spreads of loan rates over banks' cost of funds for small firms. (SLS)
o By comparison, more banks began to report weakening loan demand from small firms as early as the fourth quarter of 2006. Only in the first quarter of 2011 did the share of banks reporting stronger loan demand by small firms exceed the share reporting weaker loan demand. (SLS)

Primary Residence Ownership and Small Businesses:
o "The owner's residence is every bit as much a part of the business balance sheet as the firm's equipment and vehicles. In fact, the asset value of the owner's residence is more important to more owners than other real estate assets. A decline in the value of the residence therefore adversely affects the balance sheet." (NFIB 2011, page 29)
o Ninety-four (94) percent of small employers own a primary residence (94 percent). By comparison, 91 percent of REALTORS® including 94 percent of REALTORS® aged 60 or older own their primary residence. (NFIB 2011, page 29; NAR 2011, page 73)
o Housing equity fell from $13.5 trillion in 2006 to $6.2 trillion according to Flow of Funds data from the Federal Reserve, largely due to price declines measured to be about 30 percent from the peak. (FoF)
o In 2010, 65 percent of small business owners who own a primary residence have a mortgage on it and 24 percent of mortgaged owners indicate that one or more of the mortgages taken out on the primary residence was to finance business activities. These figures are similar to those in 2009. (NFIB 2011, page 33)
o Twenty-nine (29) percent of small employing businesses operate primarily from the home in 2010; the share is much larger among firms with fewer employees. Thirty-five (35) percent of firms with 1-9 employees are primarily operated from home while less than 5 percent of firms with 20 or more employees operate primarily from home. (NFIB 2011, page 54)

Real Estate Equity and Small Business or Other Investment
o In a 2007 paper on distribution of the net proceeds received by sellers of existing homes, Kennedy and Greenspan estimated that between $50 and $400 billion went toward financial and other investments annually in the period 1991 to 2005. The average annual investment was $160 billion. (pages 16 to 17, line 11)
o In the same paper, it was estimated that from 1998 through the first half of 2002, an estimated 14.5% of free cash from equity withdrawals went to real estate, business investment, or taxes. This amounted to $15.5 billion on average each year. By comparison, the share going to stocks and other investment was 7.5 percent. (page 22)
Data Sources:
FoF - Federal Reserve Flow of Funds
NAR - National Association of Realtors®
NFIB - National Federation of Independent Businesses (see specific papers cited below)
SBA - Small Business Administration
SLS - Federal Reserve Senior Loan Officer Survey
Large and middle-market firms are generally defined as firms with annual sales of $50 million or more and small firms as those with annual sales of less than $50 million.
SUSB - Statistics of US Businesses

As a Research Economist at NAR, Danielle studies tax issues, the wealth impact of home ownership, and different measures of home prices.

The annual Franklin County Pumpkinfest is coming up and it is a great family event.

FREE to the public but will need cash for food, beer and family fun! 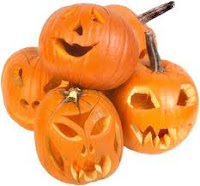