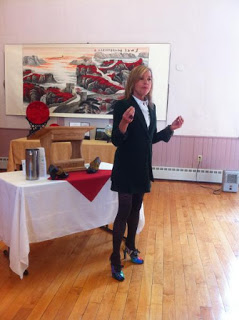 Shelburne Falls is now a "Cultural District".  This is wonderful news for the village.  It is truly a special place.
Cinderella moment for Shelburne Falls

But Anita Walker, executive director of the state's Cultural Council, got to walk the town in a handpainted pair of "Art Walk" shoes that looked as though they were made for her. "When I came here last time, I thought this was an amazing place," said Walker. "Today I'm living every girl's dream: I'm wearing 'magical' shoes from the Art Walk," she said, modeling a stylish pair of lace-up high heels in primary colors.  During the village's quarterly Art Walks, shoes that are decorated by local artists are placed on paths to direct "foot traffic" to art studios, shops and galleries that stay open late that evening, when the streets are filled with people, roving musicians, artists and appetizers.  The shoes had been part of display in Town Hall, along with the Art Garden's recent exhibition on the Deerfield River and with artworks given to Shelburne Falls from its Sister City, the village of Mutianyu, China.  Walker said she was not only going to walk through Shelburne Falls in her Art Walk shoes, but she was going to wear them to other cultural districts across the state.

"This is the only place -- probably on the planet -- where people make a destination of going where the potholes are. And they're beautiful," she added, referring to the Glacial Potholes tourist attraction in the Deerfield River. "Our best cultural districts are real, authentic places where you celebrate who you are, what you are doing."  "I brag about you every place I go," she told the 45 to 50 people who attended the luncheon celebration.  Shelburne selectmen's Chairman Robert Manners said the word "culture" stems from a Roman word meaning "to cultivate or grow," as in agriculture.  "Here we are today, celebrating the creation of the cultural district of Shelburne Falls," he said. "It's only fitting that we recognize this, for it's consistent in this area throughout time." He pointed out that American Indians had established the Salmon Falls Glacial Potholes area as a common fishing area and signed a peace treaty; later, the available water power made it a center of industry.  Manners said the sense of place involved "things that are not tangible, that are here for us to enjoy."
"This is a seed that we all take with us, to plant and grow elsewhere," he said.
State Sen. Stan Rosenberg, who represented the two towns composing the village of Shelburne Falls for many years, said he is glad the village was one of the first to be included in the new cultural district program. "The bootstrap mentality, of we-can-do-it, is represented by this community. This is just a formal recognition of the cultural past -- of what you already have here," he said. State Rep. Steve Kulik, who represents the towns, said he will work with the village leaders "to make sure this is not just a designation in name only."
Mary Vilbon, executive director of the Shelburne Falls Area Business Association, said that a new highway sign has been designed by an artist for Shelburne Falls, but that money is needed to pay for creating the road sign and installing it.  The village began applying for a cultural district designation over a year ago. Some of the other communities with this designation include Gloucester, Concord, Hyannis, Rockport, the Fenway district of Boston and the Upstreet district of Pittsfield.

The Cultural Designation Program was enacted by the Legislature in 2010, and participants hope it will open doors to more grants, more publicity, and more resources for boosting businesses.
By DIANE BRONCACCIO Recorder Staff