You are invited to hear Cathy Roberts' daughter, Shelley, perform on Saturday April 20th at the Trinity Church in Shelburne Falls.  For those of you who haven't heard Shelley sing, she has an amazing voice and you are in for a real treat. 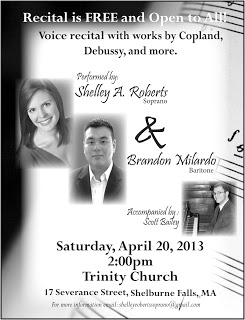 Shelley Roberts, soprano, has recently been seen performing the role of Bagatelle in Offenbach's Bagatelle and the role of Catherine in Offenbach's Le Mariage aux Lanterns in Perigueux, France.  Last Spring, she was the soprano soloist for Westfield State University Choral's performing Mozart's Mass in C and Regina Coeli. In 2011 she performed the role of Despina in Mozart's Cosi fan tutte. She holds a Master's from Westminster Choir College in vocal performance and voice pedagogy and her Bachelor's Degree from University of Massachusetts Amherst in music education and performance. She is currently an instructor at Massachusetts College of Liberal Arts in North Adams and also has her own private studio.

Scott Bailey
Staff Assistant, Accompanying,?Piano Ensemble?B.M., State University of New York at Potsdam; M.M., University of Massachusetts
Scott Bailey is staff accompanist/coach at Westfield State University where he serves the accompanying needs of student and faculty vocalists and instrumentalists. He has served as accompanist at UMass Amherst, Massachusetts College of Liberal Arts, and as Director of Choral Activities at Bay Path College. He was the choir director for the Bay Path College Festival Choir trips to Prague, Munich, and Salzburg.  He served as the music director at the First Congregational Church of North Adams, UCC, where he also coordinates the North County Music Series and directs the North County Ecumenical Choir. He is currently a substitute organist throughout Berkshire County and the Pioneer Valley.?Scott has been certified as a Colleague of the American Guild of Organists and is a member of the Berkshire and Springfield Chapters. He accompanies the Hampshire Choral Society in Northampton, MA and is a freelance pianist, organist, and music director throughout western Massachusetts. Scott has recently been featured on the Albany Records recording Connections by saxophonist Lynn Klock.
BRANDON MILARDO
A native of Middletown, Connecticut, baritone Brandon Milardo is an emerging artist from the Boston area. Recent performances include the title role in Cape Cod Opera's outreach production of Don Giovanni, Marcello in La bohème with Boston Opera Collaborative, and Count Almaviva in Le nozze di Figaro with Longy Opera. Mr. Milardo has also appeared with Lyric Stage Company of Boston, Lowell House Opera, and Opera del West.
Equally active on the concert stage, Mr. Milardo has performed the roles of Bobby in Kurt Weill's Mahagonny-Songspiel, as well as the baritone solos in Weill's Seven Deadly Sins, Saint-Saëns's Oratorio de Noël, the Rutter Requiem, Faure Requiem, and various Bach cantatas and oratorios.
Mr. Milardo is a graduate of the University of Massachusetts and the Longy School of Music of Bard College While at UMass, he was a member of the ensemble for the world premiere of Eric Sawyer'sOur American Cousin, and has performed at workshops for Dr. Sawyer's upcoming opera The Garden of Martyrs. He is currently scheduled to cover Page and sing in the ensemble of Boston Midsummer Opera's production of The Merry Wives of Windsor in July.