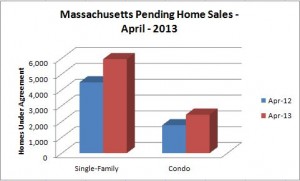 Pendings Sale for April
Despite the low inventory of homes for sale, buyers made a huge push in April to make offers on homes. In fact, the push was so huge that more single-family homes were put under agreement in April 2013 than in any month since MAR began tracking pending home sales data in January 2004. While condos didn't hit an all-time high, they did hit their 2nd highest total.
Link to April 2013 Pending Sales News Release
Here are the highlights:
This information is provided by the Massachusetts Association of Realtors