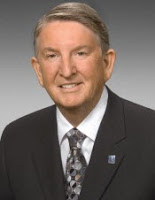 REALTORS® are finally being heard, and it makes you want to jump and shout!

I'm pleased to say that our efforts to make our voices heard by the Administration have had a positive impact. The President agrees with the National Association of REALTORS® (NAR) on an overwhelming majority of the housing finance issues of the day.

In a speech at the Desert Vista High School in Phoenix, the President spoke to area REALTORS® and others about housing policy and his vision for reform of the housing finance system. In the speech, he stated his commitment to ensuring consumers retain access to the 30-year mortgage--traditionally the quickest route into the middle class--and cutting red tape so that families have access to safe, reliable mortgages.

Additionally, the President expressed support for reform of the Federal Housing Administration (FHA) and the Government Sponsored Enterprises (GSEs). He said the Administration plans to continue the phase-out of GSEs Fannie Mae andFreddie Mac, now in conservatorship. At the same time, he supports the creation of a common securitization platform to encourage investment in mortgage-backed securities. NAR agrees with the Administration's view that any new system includes a government guarantee.

The President said he supports the historic affordability role of the FHA, which is critical to first-time homebuyers. While we support the goal of maintaining the FHA as an affordable option, NAR believes the FHA should preserve access for all qualified middle class families.

The Administration calls on Congress to approve refinance programs that provide more relief to troubled borrowers. NAR supports the government's refinancing program, known as "HARP," along with "bright line" standards that provide certainty to community banks selling loans on the secondary mortgage market.

While we have concerns about specific FHA reforms, protecting loan limits and keeping down payments low, we believe recent bipartisan legislation introduced in the Senate is a good place to start.  President Obama made good use of the bully pulpit in stating his commitment to protecting the dream of homeownership for all Americans.

Over the past year, REALTORS® have sometimes felt like a voice in the wilderness. No longer.